Actor Jeremy Renner Lends His Voice and Character to a New Ram Truck Brand Film “Make Sure of It,” Launching Today Across Digital and Social Channels 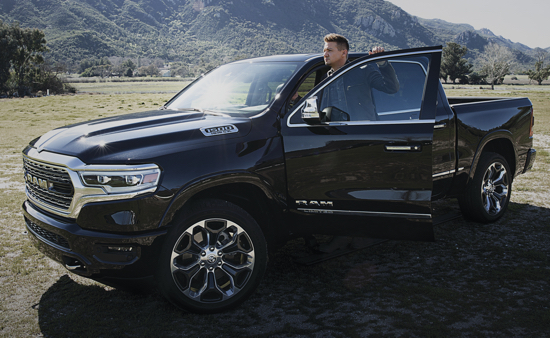 JStar’s Orange County Chrysler Dodge Jeep Ram of Anaheim – Building upon the Ram Truck brand’s “Next Generation” campaign that focuses on instilling values and confidence in our children, the new long-form “Make Sure of It”  video introduces Academy® Award nominee Jeremy Renner as the new voice of the Ram Truck brand.

The video opens on the face of a young girl as the voice of a father recites his hope for his daughter’s future, how through her own strength and courage, she will shape the world around her, and the optimism he has for her endless possibility. The father then optimistically pledges, “I’m gonna make sure of it,” revealing the voice to be actor Jeremy Renner, sitting in a Ram 1500 looking in the rearview mirror proudly at the young girl in the back seat. The spot continues with the tagline “Make the Next Generation Even Better. That’s Our Job” as a collection is shown of mothers, fathers, sons and daughters that Ram has featured in their films over the years to remind people how important this responsibility is to all of us.

“As the father of a young daughter, the strong message in this film really spoke to my heart,” said Jeremy Renner. “I believe this film is an inspiration as I work every day to instill the same values of confidence, courage and kindness in my daughter.”

“We are grateful to Jeremy for lending his voice to our upcoming Ram brand campaign,” said Olivier Francois, Chief Marketing Officer, FCA. “In return, we are proud to leverage our platforms during the Big Game to showcase a message that is dear to his heart and reflects our shared values.”

“Make Sure of It” is the third collaborative project between the Ram brand and director Jaci Judelson. Judelson also directed the brand’s visually stunning, gritty and winner of the #Femvertising award from SheMedia 2015 campaign “The Courage is Already Inside,” saluting the character of strong women who have met and overcome many challenges on the road to achieving their goals. Judelson also directed the Ram brand’s 30-second spot “The Pack,” delivering the same message of leadership with a more light-hearted approach. In the video, a lone sheep breaks free from the pack and makes its way to the top of the hill and takes a leadership position sitting down by the dog, conveying the message: “The ones with the guts to stand apart – join a league of their own.”

“It’s been an honor to direct this film with such a potent and positive message, at a time where encouraging young women and girls to be unstoppable is essential,” said Judelson. “As a mother of boys, I am proud to be part of this ‘Next Generation’ series that speaks to all kids and the power of parenthood.”

“Make Sure of It” is the third in a series of value-based “Next Generation” films from the Ram Truck brand. The first spot, “School Talk,” which debuted as part of 2018 Father’s Day observance, reinforces the importance of fatherhood and instilling enduring values in our children. The second spot, “Thanksgiving Grace,” honors these values again, with the focus on being thankful for those in our lives who enable us to do what is right. It aired this past November (2018)

In addition to “Make Sure of It,” Renner will voice the new Ram Truck brand campaign “Lead or Be Led” rolling out this February.

The Ram Truck brand’s “Make Sure of It” was created in partnership with Doner. The “Next Generation” campaign was created in collaboration with Austin, Texas-based GSDM.

About Ram Truck Brand
In 2009, the Ram Truck brand launched as a stand-alone division, focused on meeting the demands of truck buyers and delivering benchmark-quality vehicles.

With a full lineup of trucks, including ProMaster and ProMaster City vans, the Ram brand builds trucks that get the hard work done and families where they need to go. From the no-compromise Ram 1500 that defines the future of pickup trucks with innovative design, the highest quality materials and class-exclusive technology, to the Ram Heavy Duty which combines the ability to out-power, out-tow and out-haul every single competitor with the segment’s most comfortable ride and handling, Ram is committed to product leadership.